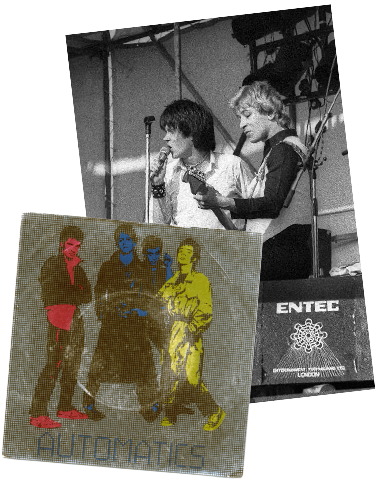 Check out the Automatics Discography

David Philp is lead singer and songwriter of The Automatics, an English Punk/Powerpop band that headlined London’s Marquee Club, where the Sex Pistols and The Damned often performed in the late 1970s. Their 1978 hit “When the Tanks Roll (Over Poland Again)”, released on Island Records was one of the first records to be produced by Steve Lillywhite, who went on to produce U2, XTC, the Pogues and many others.

The original line-up of The Automatics featured Philp on vocals and guitar, along with Wally Hacon (guitar), Bobby Collins (bass) and Ricky “Rocket” Goldstein (drums.)

Thanks to the praises of influential DJ John Peel, “Tanks” reached number one in the embryonic and important, Punk/New Wave charts and remains a favourite of punk rock devotees to this day. It is listed at number 22 in the top 50 punk songs from that era by Punks Reunited.

The Automatics played gigs with Johnny Thunders and The Heartbreakers and Thunders himself played on the Automatics first album, Walking with the Radio (available through Angel Air, UK). The Automatics toured England with the Vibrators and played the Reading Rock Festival in 1979.

In 1980, Dave Philp moved from London to California, where he remained lead singer and songwriter for The Automatics but with different players in the band.

The band’s early history is documented in No More Heroes: A Complete History of UK Punk from 1976 to 1980 by the English critic Alex Ogg.

As punk declined in popularity, Philp went into business for himself in Los Angeles but continued to write, record songs and play small clubs as The Automatics. Yet, even he was surprised in 2000 when a punk rock record promoter in Tokyo contacted him about releasing his first album and going on tour in Japan. Toshio Iijima of Base Records had Philp play to sold-out clubs in Tokyo and Kyoto, backed by Japanese punk musicians who had memorised both the music and lyrics of his first album. The success of that tour led Iijima to invite Philp back to Japan in 2002 and 2004. Base Records released two more albums: 2 in 2002 and Forty Virgins in the Afterlife in 2004. (Also released in Germany on Trash Records.)

In 2002, Swedish label Diapazam Records coupled together 2 early tracks and released the 7″ vinyl single “Wild One / Like a Moth into a Flame”.

The improbable and belated rediscovery of Philp led National Public Radio’s Ira Glass to conduct an interview with Philp on This American Life. Under “Return to Childhood”, Philp is featured in “Act II, Punk in a Grey Flannel Suit”.

This radio interview led to his life story being optioned by Hollywood film producers on two occasions, though not yet actualised. It also prompted one of Philp’s early supporters, the aforementioned legendary DJ John Peel, to interview him for BBC Radio in London. It also inspired Philp to write and record new songs on the theme of Britannia.

Born in Ripon, Yorkshire, Philp’s father was an army major and the family was often posted overseas. Philp remained in England to attend school in Cheltenham, and then Keele University before moving to London for his music. He did a short stint with early punk band The Boys before forming The Automatics.

Britannia, released in 2005, is reflective of Philp’s post-war upbringing and passion for history. The album reflects on the nature of being English, viewing his native land from afar and the conflicted feelings of an ex-patriot. The album is more musically varied than The Automatics early punk sound but musicians include many of Philp’s punk era friends including Steve Jones (Sex Pistols ), Ian McCallum ( Stiff Little Fingers ), Mick Rossi ( Slaughter & the Dogs ), Michael Des Barres ( Silverhead, Detective, Power Station ) and others.

Veteran UK DJ Mike Read, invited Philp to tour England in the summer of 2006 and the single “Old River Thames” went to number one on the Big L/Capital Radio charts in London in January 2007. After the release of Britannia in the U.S. in the spring of 2007, other songs found airplay among independent DJs such as Jonathan L at KUPD-Phoenix, leading Philp to perform at the South by Southwest event in Austin, Texas. By September 2007, other singles had found airplay including “England Expects”, “Who Died and Made You Brian Jones” and “British Beat” which featured Steve Jones on guitar.

“ The Last Noel” was released in October of 2007 and unlike all other Christmas albums consists of 12 all original compositions. Recorded concurrently with “Britannia” the album features Steve Jones , Ian McCallum and Mick Rossi as well as Brian Coffman, (guitars) and Paul Crowder (drums). It was again produced by Jim Wirt who also played bass, additional guitars and supplied backing vocals. It has become a staple of Christmas music and regularly gets over a million plays a season.

Philp’s next album, released in 2008, was The Jukebox of Human Sorrow, which is included the title song. The theatrical art of L.A.-based artist and musician Marnie Weber of The Party Boys featured on the cover and it was produced by Jim Wirt.

Around that time, Philp survived a bout of lung cancer that led him to write a series of balladic songs about mortality, which he released under his own name and called The Dressing Gown Sessions. In 2010, without a band, Philp went on the road to perform these songs at SXSW and at radio stations throughout the northeast and the west. He subsequently re-released them in The Automatics 2020 releases.

In 2011, his punk origins received fresh attention when his 1977 hit “Moth Into the Flame” was featured in the critically acclaimed movie Kill the Irishman. The following year, When “The Tanks Roll Over Poland” was re-released on vinyl as a single by Paramecium Records in Spain.

In the same year, Philp wrote a song cycle based on the circus freak Lobster Boy, that combined classical musicians with rock themes and was produced by Tom Morse.

Philp continued to work on Lobster Boy, writing additional songs to refine it as a punk rock musical. It was selected for a performance hosted by the ASCAP Workshop at the Wallis Annenberg Center for the Performing Arts in Beverly Hills in February 2017.

In 2018 Philp released West of Wherever as a vinyl LP with his band The Automatics, which was largely recorded in an old school method with a live band in the studio. Once again Automatics stalwart Paul Crowder played drums, Coffman played guitars and Timothy Andrew Edwards played bass. Additional guitar parts were done by Nick Dias.

In 2020, at the outset of a new decade, Philp decided to release 100 of his songs divided into eight separate albums. All 8 albums hit the streaming and download music platforms in the same week. Most were from the last 20 years, though some from as early as 1978.

The 1978 album features two unreleased Island Records singles from that same year produced by Steve Lillywhite and Richard Gottherer, as well as tracks that feature Johnny Thunders and Steve Jones.

Producers who worked on these albums include Jim Wirt, Steve Lillywhite, and Brian Ray, who also played guitars.

In early 2020 Philp was contacted by Blank Generation’s Steve Green. Their lengthy, four hour radio interview resulted in a collaboration and Green’s Blank Generation Records selected four songs from different albums, which will be released as a white vinyl EP called Octonary in October 2020. It will be housed in a unique full colour sleeve with four-page booklet.

A feature length interview with Philp came out in Vive Le Rock in September, 2020 with unpublished photos by Adrian Boot, who had an archive of Philp and the band playing Reading Festival in 1978 and recording their first record at Island Records with Steve Lillywhite.

Vive Le Rock’s November issue will be reviewing the octet of previously unreleased albums and the magazine’s editor, Eugene Butcher, is looking into the possibility of getting The Automatics to appear at the hugely popular, Blackpool based, Rebellion punk festival in August 2021.