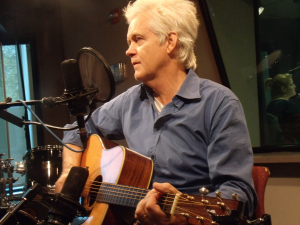 England native Dave Philp stopped by WERS this morning to perform music off his latest album, The Dressing Gown Sessions, released in mid-July. Founding member of the English punk rock band Automatics, Philp’s punk life ties in to his solo work, but he actually doesn’t take much inspiration from bands. “I’m not really interested in other people’s music,” he said. “It’s not and easy thing to admit.” But he knows what he’s doing; Philp has been featured on This American Life for his music. “I try to get myself out of the way enough to pluck these songs out,” he explained. “A good song is a cheap holiday in someone else’s life. Whatever that song is, and if it’s enough of what it is, it will mean something to somebody else.”

Philps started his set with “If You Don’t Know By Now,” a song that put emphasis on his raspy voice, clearly reminiscent of his days as a punk rocker. Half of a lung actually had to be removed from him due to a rare form of lung cancer. “I have a different sound now and I think I like it more,” he said. “I think I’ll have another one chopped.” He laughed, then launched in to “Suburban Bali ‘Hai,” his seven-string guitar giving an at home sound. Philps closed off his set here with “An Irish Blessing,” his musical grit and honesty only enhanced by his charm.

Our Live Music Week reminded Philps of one of his favorite live shows: X-Ray Spex at the Nashville. “The Police were openers and they got booed off the stage,” he said, “but when the Spex came on… they totally ripped. It wasn’t the music, it was the energy that carried the day. That’s what live music is about; when that energy goes like that, there’s nothing else like it.”